Art-Alchemy is the technique of using traditional art methods to transform an individual into another figure. When a digital painting depicts someone as a known superhero, the art becomes fan-art. All together, art alchemy is one part of the multifaceted artistry of Antione GHOST Mitchell. He has alchemized dozens of clients and featured females in his SuperHERo collection that includes former First Lady Michelle Obama.

He is also the illustrator of three children’s books: My Name is Queen, The Great One, and Summer Saves Summer. He recently launched a Black Geek Point of View YouTube series on his PoeARTry Media channel.

Following the murder of George Floyd, Mitchell sought an outlet to express an array of emotions triggered by the continuous murders and injustices that prevail in American society.

He took to his art and alchemized George Floyd as Superman. We caught up with Mitchell to discuss his most recent rendering.

On May 25, a Minnesota police kneeled on Floyd’s neck during a non-violent arrest, killing him. Floyd’s death erupted international outcry against police violence and for the protection of Black lives across the world. How did you choose Superman as the portal instead of another “hero”?

MITCHELL: One of the family members during the televised funeral said, “I thank God for giving me my own personal Superman.”  I wanted to eventually create a work of art dedicated to him (and others) but I didn’t want to do anything too intense.  Comic book art is something that has always made me feel happy and less stressed. When I kept seeing that quote from the family of George Floyd the idea of manifesting him as Superman was cultivated. 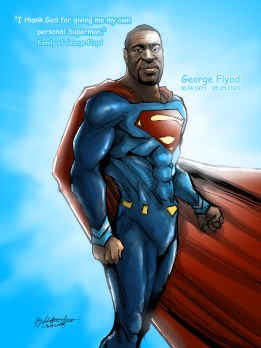 Did drawing this help you process the death and protest?
MITCHELL: YES. If this horrible incident of what happened with George Floyd had occurred about ten or more years ago I would have been really fired up and ready to create some very intense art.  I would have probably been in some of the local protests as well. …And I would have become exhausted.  I learned a while ago that I really have to be careful how I use my art because if I’m exhausted then so will my art..and I LOVE ART.

I have the most fun creating comic book and fantasy art so taking that same approach with such a serious and heartbreaking incident actually made it much easier to manifest. The intense art DOES touch folks and can create interesting and phenomenal teaching moments, but at the expense of my own sanity.  However, when I create art of the same situation but with a different and less intense approach, I’ve found that it touches the heart instead of rage in people.  Rage is important, but I want to be on the healing side of justice via art.

This helped me in dealing with the pain of what happened to George Floyd, Breonna Taylor, and so many recent others.  I was very upset but tried hard to keep my anger away from social media.  But it was when watching “trump” live in Washington DC when he unleashed the police upon peaceful protestors who were NOT violating curfew, just so he could have a photo op in front of the nearby church. That’s when I lost it.  All the anger and sadness came to a head and I found myself crying in my wife-queen’s arms. (Mitchell and wife, Erica, are creative partners.)

You’ve said that you want to share the power of art and present aspects of life as it is lived. What does this art give in that way?
MITCHELL:  Well, in the case of the fan art of George Floyd as Superman, it’s a dynamic metaphor to pay homage to how his loved ones viewed him. I actually slightly battled even creating it because I didn’t want to give the wrong idea. Superman is known as being indestructible, bulletproof, super fast, and can fly. I think ANY Black person facing racist police would love to have these abilities. What if George Floyd had those abilities to escape the clutches of death by folks who are supposed to act accordingly to the oath of protect and serve? But then I thought, Superman CAN be killed, however, his spirit of hope will always live on through others. Superman’s very existence—and him being the first superhero—is something that has transcended all mediums of entertainment and beyond. So it was perfect to manifest George Floyd as Superman.

What would you like to say to the Floyd family?
MITCHELL: I would, like anyone, express my condolences to them.  I would want to hug and embrace them. I would most definitely give them a framed 18 x 24 inch print of the digital painting of George Floyd as Superman. I’m not making any prints to sell to anyone. I don’t want to profit off this image. The only print I want to make of it is the one I would give to the family of George Floyd.

Mitchell is a graduate of College of Fine Arts at Southern University and A&M College in Baton Rouge and the Art Institute of Houston.  PoeARTry Creative Movement, LLC is his official brand. Follow his work at @antoineghostmitchell and @sankofaseymbrace. Facebook.com/AntoineGHOST. Youtube: PoeArtry Media www.sankofaseymbrace.com.